Why is it important for vets to know an animal’s weight?

Veterinarians rely on weight measurements and other vital statistics to monitor the health and well-being of animals. They prescribe and mix medications for animals based upon the animal’s weight. Reliable animal scales provide information to help determine if the animals need more exercise or a change in diet, and can even help ascertain pregnancy. After the mother gives birth, veterinarians can use weight measurement to track growth in baby animals such as puppies, piglets, calves and kittens. For livestock owners, an animal’s weight is an important consideration when choosing feed formulations or specifying amounts.

Ask any veterinarian – weighing animals is not an easy task. It can be as difficult as … herding kittens.

Generally speaking, animals can be a little distressed about being captured, even if you’re dealing with a friendly domestic pet. Once you accomplish that (and if you don’t require stitches or a tetanus shot from your efforts), the next challenge is to position the animal on the scale. And if that wasn’t hard enough, now get that squirming, disgruntled critter to stay still. You stand a better chance of being struck by lightning, which might actually sound more appealing at this point.

To collect an accurate weight of a moving animal, you need a weighing scale that not only accommodates the animal’s size, but also one that is durable, easy to clean and equipped with functions to help produce the most accurate weighing results.

Any type of movement can prevent a scale from registering a stable weight. That’s why weighing scale manufacturers have developed specialist weighing equipment that is well-suited for weighing all types of animals from small dogs and cats to large livestock and cattle. For the most accurate results, it’s important to use a weighing scale with an animal/dynamic weighing function. This means the scale has the ability to provide an average weight based on the force exerted by the animal or liquid over an extended period of time. Once the scale completes the internal calculation, it displays an accurate weight.

The best types of animal weighing scales for vets

There are many types of veterinary scale on the market that can be used weigh anything from small insects large livestock. The best veterinary scale for your practice will depend on your specialism, if you solely work with pets or domestic animals such as dogs and cats, then bench or floor scales will work in most cases. Larger animals such as livestock and animals found in zoos require pallet beams and platform scales with larger weight capacities which may need to be customised with cages for more volatile animals.

Compact precision balances are multi-purpose, portable scales that can be used for accurately weighing small animals and insects. They tend to feature smaller weight capacities and have a higher readability (up to 0.001g). 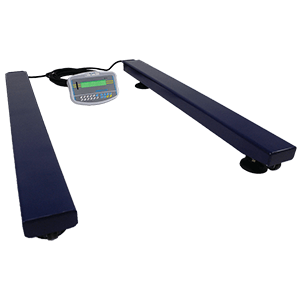 Pallet beams are versatile weighing equipment that can be combined with platforms, cattle crush or cages and make ideal cattle weighing scales for sheep, pigs and other livestock in farming. Due to the pallet beams large weighing capacity and adaptable nature, they allow for more complex animal weighing such as the weighing of lions, monkeys and elephants in zoos and wildlife sanctuaries. Pallet beams offer dynamic animal weighing applications and can be used to weigh multiple animals at once.

Looking for livestock scales? See our article on how to choose the best cattle weighing scale for farming.

Platform scales incorporate a variety of scales from large pallet scales to portable bench scales. These scales utilise dynamic animal weighing features to carefully take the weight imprint of an animal for calculating an accurate weight. Platform washdown scales tend to be constructed from stainless steel bases that are easy to clean down after use.

If you would like more information about our range of animal weighing scales including our recommended dog scale, pet scales or livestock scales, please see our veterinary markets page or contact us.

Pet Weighing Scales: All You Need to Know